In 2000 the Fund for Cultural Broadcasting Productions together with the Sandberg Institute organized a workshop, inviting a number of filmmakers and designers to investigate whether a traditional documentary film could be presented in another form using the new media. The documentary Tiengemeten was one of the starting points.

I took part in the workshop for a year. The Internet was still young. There were lectures from various experts and the general belief was that, broadly speaking, the World Wide Web would permanently lead to a better world.

Together with the designer, Fred Inklaar, I presented a draft design in 2001. In 2003 this design was adapted and executed, in cooperation with GridLine.

It was a wonderful idea: you could roam the island in time and space using maps from different periods. The basic colour of the site changed with the seasons, and each season was accompanied by a characteristic sound. In winter, of course, it was the sound of the geese. 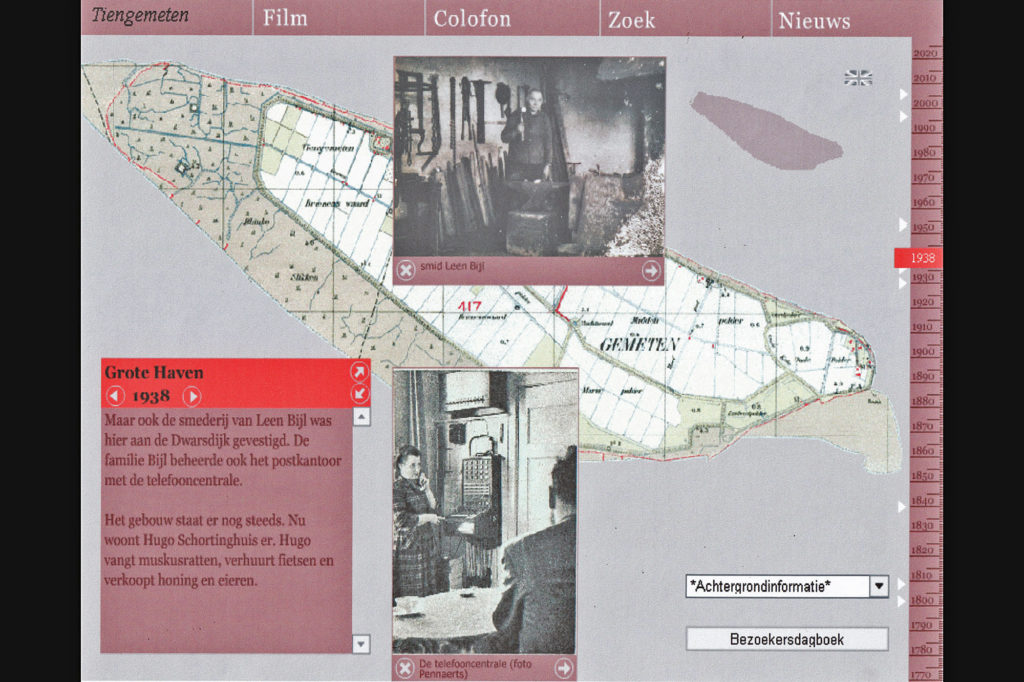 In all the site featured over 500 photographs. Partly old ones, sometimes of former inhabitants, but I also kept adding new photographs (and texts) I had taken myself in the course of all those years I was working on the films about Tiengemeten.

The work on the website took up three large ring binders. One of them was mainly to do with its development, one was filled with prints of the photographs and all kinds of notes to go with them, and one contained the correspondence. They were in Cabinet D, next to the other eight ring binders concerning the film Tiengemeten. Some of these ring binders were moved to the Regional Archives in Dordrecht in 2018, but I put the contents of the website binders into brown box files, which I am going to store in Cabinet I, alongside the Tiengemeten ring binders about research, editing, finishing and release.

Why all this? Yes, why. I sometimes wonder myself. There is a simple answer, of course: it’s part of the research for the film and it’s best to tackle something like this in an orderly fashion. The complicated answer is about Tiengemeten as the landscape of my childhood: Anna Jacobapolder. Some may still remember the name from the Anna Jacobapolder to Zijpe ferry, which was liable to be closed in foggy or stormy conditions. Back then the world was still disorganized, incomprehensible and full of secrets to me. In winter, hunters would walk the fields near Bruuntjes Kreke, and they might just shoot you by accident. Just like one day our home was suddenly flooded. Such things could happen, just like that. It might be that I am just tackling this incomprehensibility by organization, only to find, of course, that the next incomprehensibility was just around the corner. The other day it struck me that apart from the actual film about Tiengemeten (which should be ready in 2006) I should maybe edit another film from the same material. Some kind of personal diary about those same ten years. About all the failed projects, about dreams and imagination, about the incomprehensibility of life (and death). Ah well, who knows. If I can find the time.

I turned the website over to Natuurmonumenten (Society for the Preservation of Natural Monuments in the Netherlands) in 2012. The idea was that I would write a kind of column for them once a year. But they found that maintaining the website became too costly, and a few years later it was abandoned. The information that was on the site can no longer be found anywhere. www.tiengemeten.com now just takes you to Natuurmonumenten’s own site. 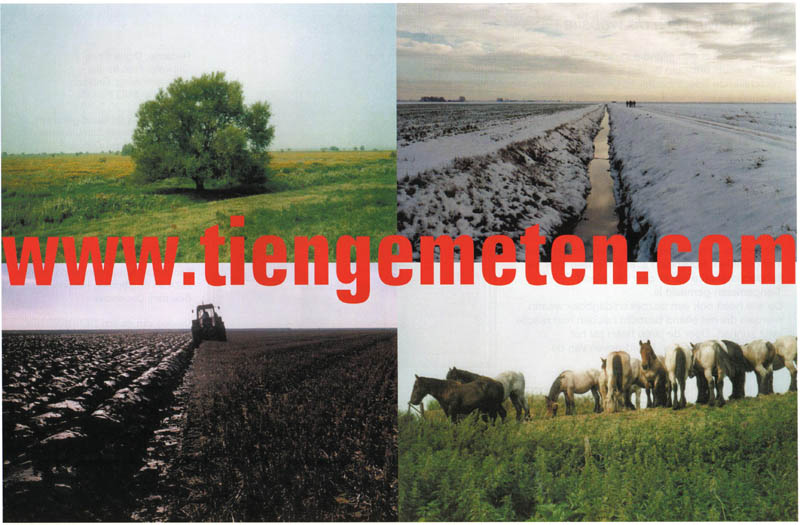 I did have everything put on a CD, but all I can find there now are individual photos and texts. Apparently the software isn’t working anymore. The miracle of moving through time and space by moving a mouse is no longer taking place.

That’s the way it goes.