This picture is the backside of the electricity bill from May and June 1954. The front looks like this:

At the time we lived in Anna Jacobapolder. There was no gas available. Everybody cooked on an electric-plate. We had a wonderful stove, with an oven. A valuable possession. During the flood disaster my father even dragged the thing to the upper floor. How he succeeded in doing this remains a mystery. The thing is extremely heavy. I know this so well because it is now standing in my dachaand I use it almost every week. A domestic device that still functions after 50 years, it’s a miracle. 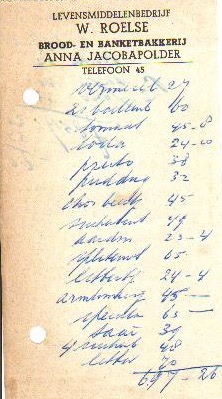 Yes, in those days cash receipts looked like that. Hand-written. Hand-totalled. I read “Presto”. That was our dishwashing liquid. It was put in a glass bottle. Sometimes they put in marbles, or plastic beads. And didn’t they also put in the plastic parts of a helicopter? We looked forward to each new plastic part.

In those days our Bakelite radio was once repaired. It was a real Philips, with all those mysterious strange names from distant radio stations. Yes, Beromünster was also a name. In later years I took that radio apart and never got it right together again. 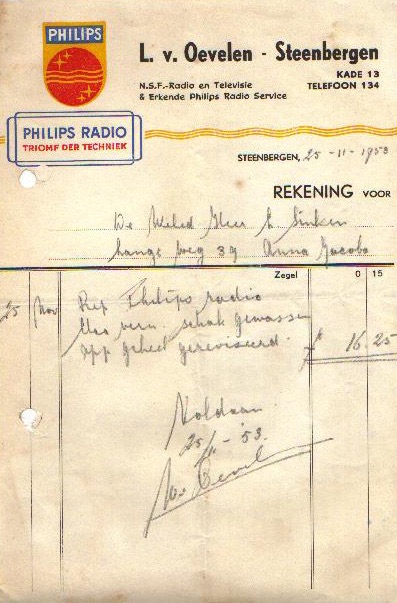 The bill of the hospital in Middelburg where I – “your daughter Dingena” – was operated on an groin rupture, was also stowed away. I was six years old and found it exceptionally humiliating that they put me in a ward with a lot of smaller children. Moreover they cried all the time, which was not very pleasant either. The only consolation was the view of the water tower of Middelburg, and the beautiful kaleidoscope I got to amuse myself with during the unremitting long days. Once I had left the hospital I got an even more wonderful present: the large box of Mobaco. With Mobaco you could make buildings, with balconies, towers and roofs. Oh how wonderful that was!

No, I cannot comment on all those sales slips. That would be madness. I presume that everybody could tell a story on the basis of the many cash receipts from his/her past.

Ok, here’s one more. A real punch card from 1961. It is my mother’s membership card from the V.P.R.O. (television broadcasting company) with dots. On the back supplied with the signature of reverent Spelberg. At that time we had already moved to Utrecht. But the old sales slips had all moved with us.